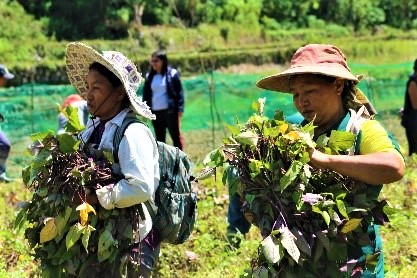 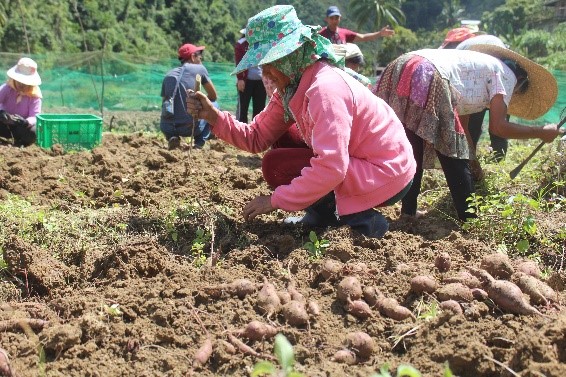 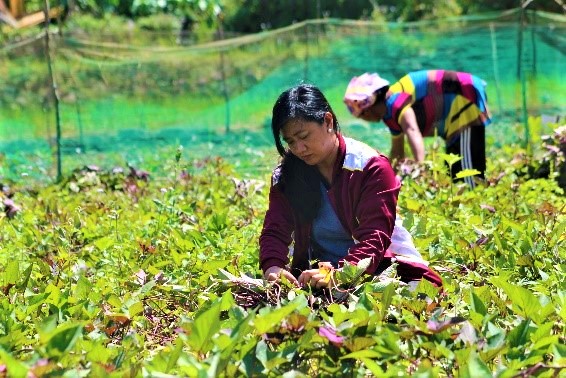 Through its Extension Services Unit, the Mountain Province State Polytechnic College conducted a Farmer’s Field Day on October 16, 2019 in Anabel, Sadanga. The activity was part of the Science and Technology Action Frontline for Emergencies and Hazards (SAFE) Project Six (6) known as Disaster Risk Reduction of Climate Change Impacts on Vulnerable Farms in Mountain Province being implemented by MPSPC. The event aimed to feature and promote technology interventions to the community on disaster risk reduction on climate change adaptation.

Before the main activity, Mr. Albert Agpawan, a barangay elder and community representative who monitors all existing projects in the community, welcomed the personnel from the College and the Sadanga LGU. He also expressed his gratitude that they were chosen as beneficiaries of MPSPC’s SAFE Project.  At the same time, he shared his appreciation towards the project for its positive outcomes. He also informed the group that other barangays in Anabel expressed their desire to be a part of the project since it was implemented efficiently and successfully.

The crops gathered during the said Farmer’s Field Day were planted last June. According to Mr. Elmer Pakipac, the cuttings from the vines are still good for planting even to this date because of the help of compost with Trichoderma. Ms. Karen Donupan cited that there are possible technologies which the farmers can easily avail since they are in a registered farmer organization. She also expressed that the Municipal Agricultural Office is willing to assist the farmers on the services they need for the sustainability of their farms.

Meanwhile, Isabel L. Walis, a farmer leader also expressed her gratitude to the project leaders and implementors. She reminisced their struggle from Fusarium infestation and narrated, “When we were kids there is an abundance of sweet potato harvested and stocked along the corners of our houses. Once they germinate, we used them for planting. The sweet potato tubers are especially sweet and soft when they get ripe. However, back in 2006, a great disparity in harvest was seen because of the infection of the fusarium in the sweet potato crops.” With the SAFE Project, these challenges have been gradually addressed.

As a result of the training needs analysis, the MPSPC team also brought clean planting materials and compost produced by the College to the farmers of Anabel as an intervention to the identified problem. These clean planting materials were initially reproduced at the established nursery in the community to augment the limited source of sweet potato cuttings. The importance of the nursery lies in its being a clean source of planting materials for the next cropping. Farmers usually do not maintain a good source of their planting materials which can be available whole year round. In other words, farmers do not have any strategies in mitigating fusarium because they have very little knowledge on the said fungal disease. Through the S&T interventions that were introduced to them, the farmers have experienced improvements in the production of sweet potato in the community.

At least thirty (30) farmer cooperators coming from the Fon-I Keepers Organization were benefitted by the established nursery.  They were encouraged to plant sweet potato by applying the S&T interventions introduced to them. Farmers claimed that by using the technology introduced to them, they saw improvements in their farms. Among the positive outcomes were fewer number of fusarium infection and an increase in sweet potato harvest. The farmer cooperators also revealed that some members of the community benefitted from the planting materials because the community members were able to sell sweet potato cuttings to other farmers within the community.  This was the result of the farmers’ capacitation on disaster risk reduction on climate change adaptation on vulnerable farms conducted through a series of three consecutive support training. The said trainings included production of quality planting materials and fusarium wilt management for sweet potato, the rapid production of trichoderma used as a control agent for fusarium and an on-farm demonstration on how to mitigate fusarium.

Ms. Walis claimed that the situation of sweet potato worsens from low harvest to none until the S&T interventions were introduced by MPSPC under the SAFE Project.  “It has been almost two years since, yet we are still able to gather an ample amount of sweet potatoes” Ms. Walis added. Aside from this, Ms. Walis also mentioned that they were able to gain income from selling sweet potato tubers and vine cuttings. Moreover, Ms. Aurora A. Filowan, the president of the farmer organization, also cited that they have shared and applied what they have learned from the trainings conducted by MPSPC, resulting in better harvest of sweet potato.

The project SAFE is implemented in the six provinces of the Cordillera Administrative region and six state universities and colleges (SUCs) in the region are involved. The project is being funded by the Philippine Council for Agriculture, Aquatic and Natural Resources, Research and Development.